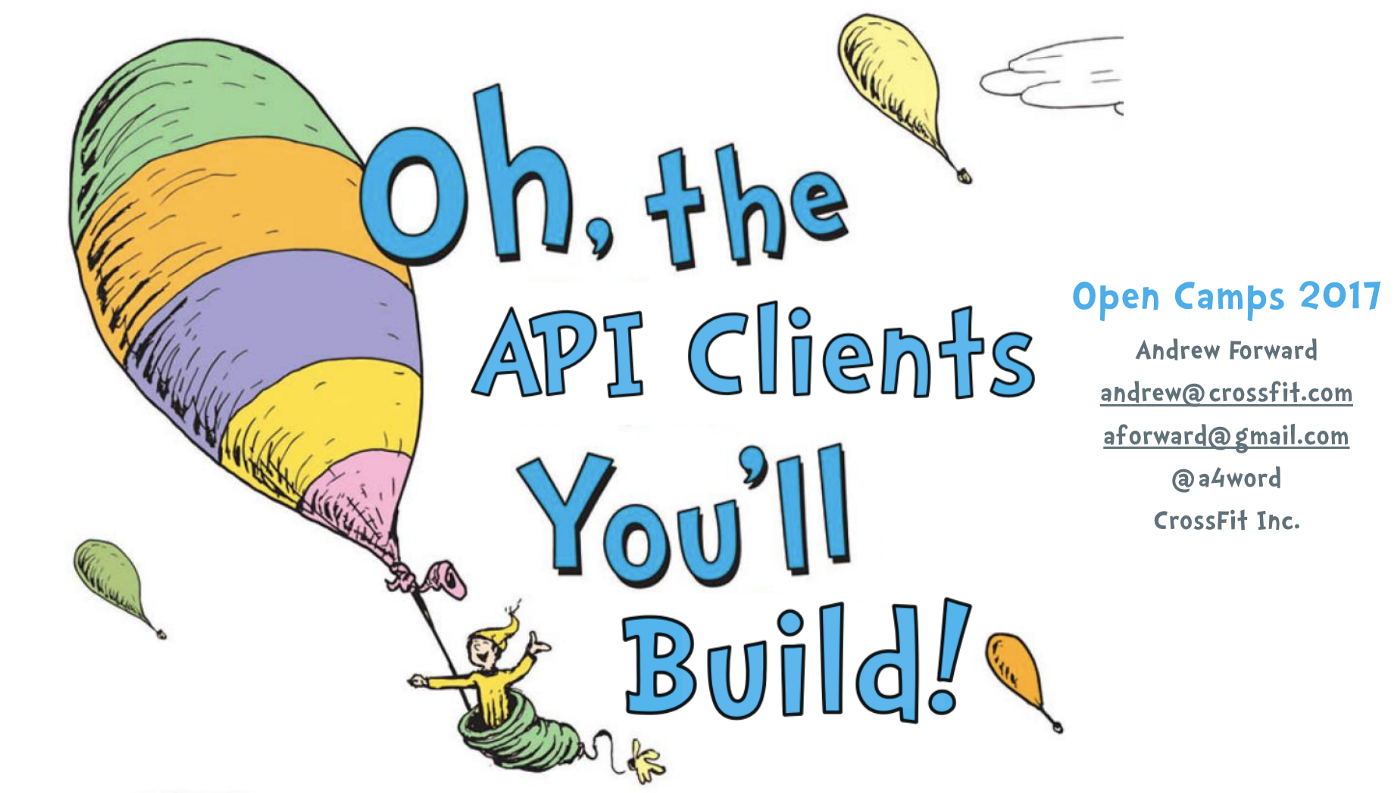 Today we are going explore how to write API clients in the Elixir language. This is a follow-up article to my presentation at OpenCamps 2017.

Elixir is relatively new programming language (v1.0 released in 2014), with one of it’s greatest features being that is stands on the shoulders of a giant in Erlang. That said, it is still quite rare to find official support in Elixir for a lot of your favourite APIs. This leaves you with the task of writing your own, or possibly trying one of the many open source options out there.

In this article, we will look at how you can build your own. The exercise of writing your own has many benefits. First, you learn a bit more about Elixir, the language, and how to leverage a bunch of it features. Second, you learn a bit more about the API you are working with. And finally, you gain some insight into how it could be built so that you can better evaluate the altneratives.

What Do We Mean API?

For starters, API is a very overloaded term. So here, I am referring to RESTful APIs available over HTTP. These are indeed not the only meaning of API, but for this context that is what we are referring to. 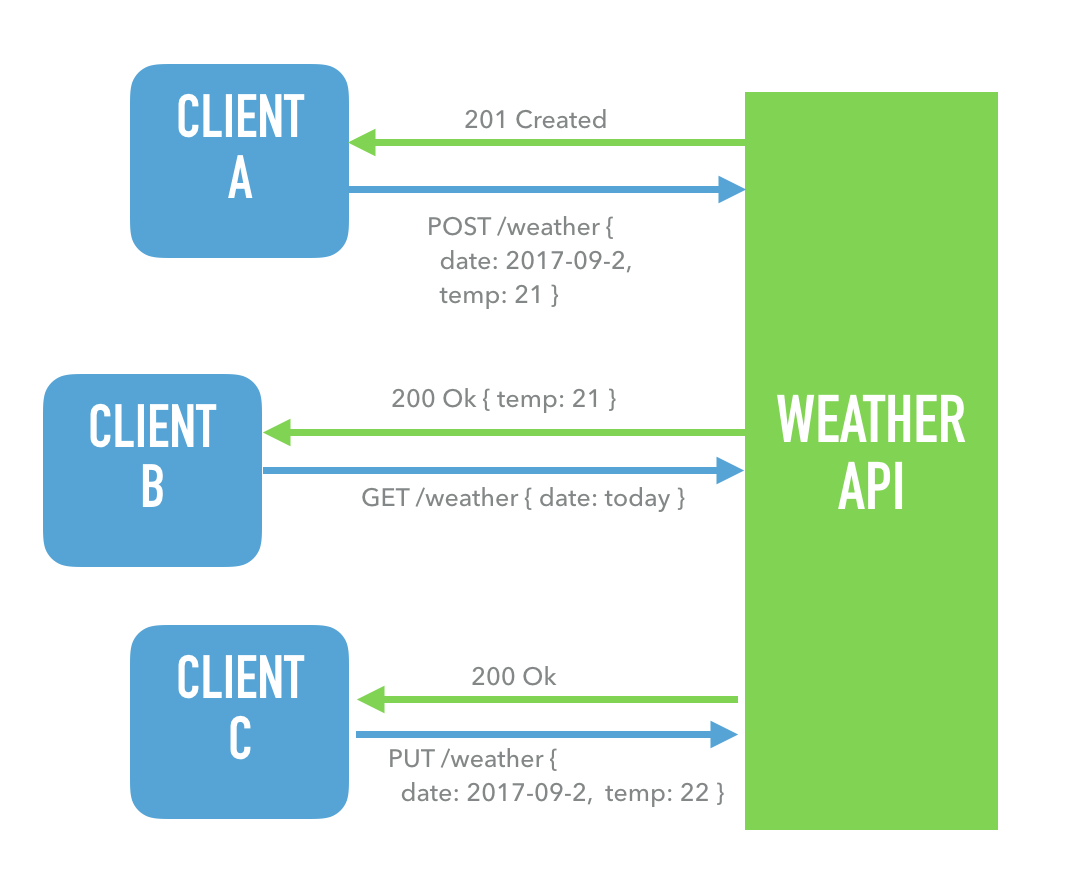 In the example above, we have a Weather API and several clients that interact with that API over HTTP. Those clients could be straight curl commands, or more likely a think wrapper written in the programming language like Ruby, Java, or in our case Elixir.

What is a RESTful API?

A RESTful service was defined back in 2000 by Roy Thomas Fielding as a design approach for network based APIs. Your service can be implemented / provide various levels of RESTful maturity. And the data to communicate with the service is usually JSON, but could also be XML, YAML, Key/Value pairs, etc.

Leonard Richardson provided a nice breakdown of the principles an a RESTful approach into various maturity levels, which was summarized well by Martin Fowler. The higher the level, the more closely you are following the full spirit of REST; but even any HTTP service offering could qualify as REST, just not a very mature implementation. 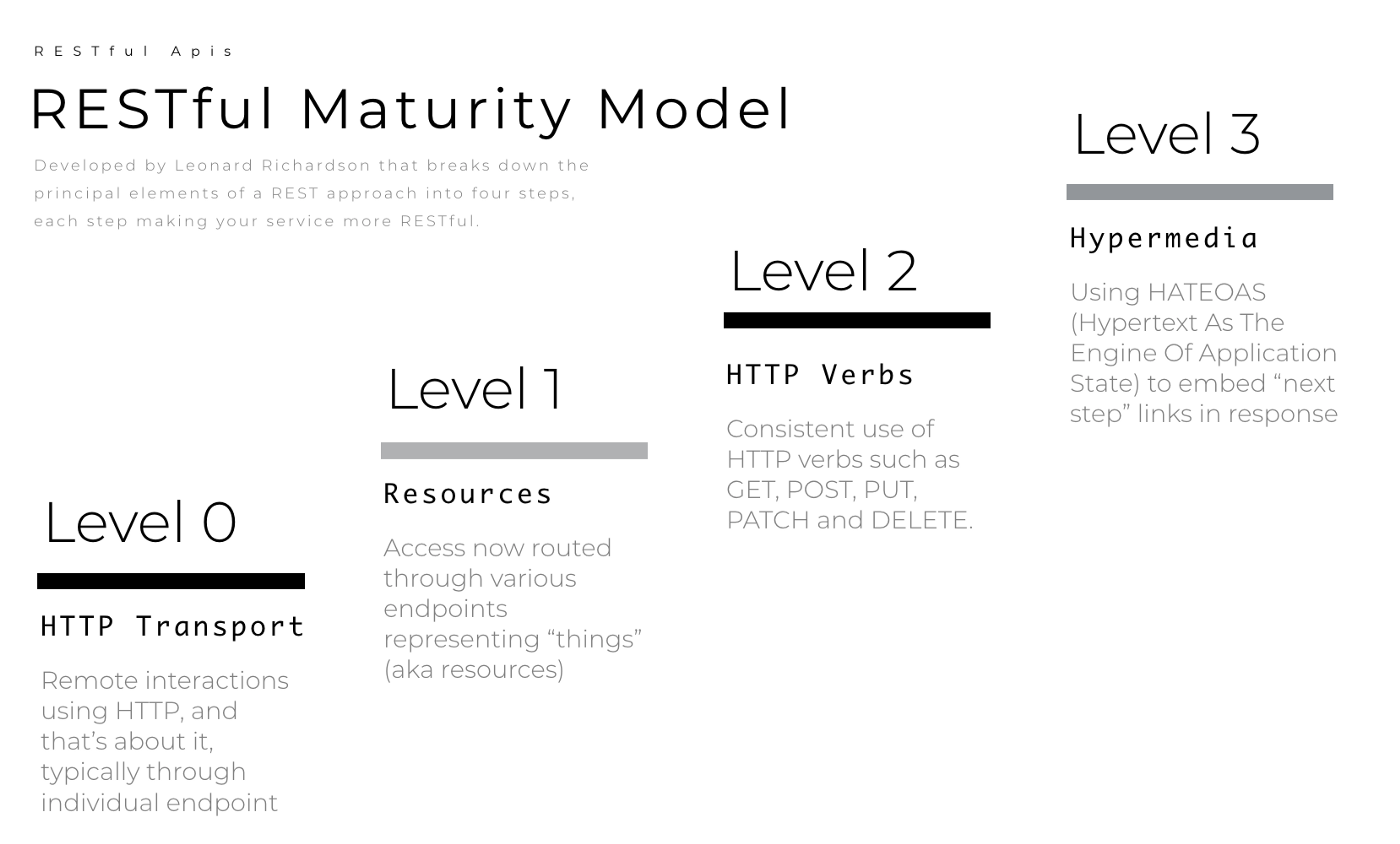 There are lots of libraries available for interacting with HTTP services. Some in pure elixir, others in Erlang, and bypass is a mocking library to help us test HTTP calls without actually reaching out the service. 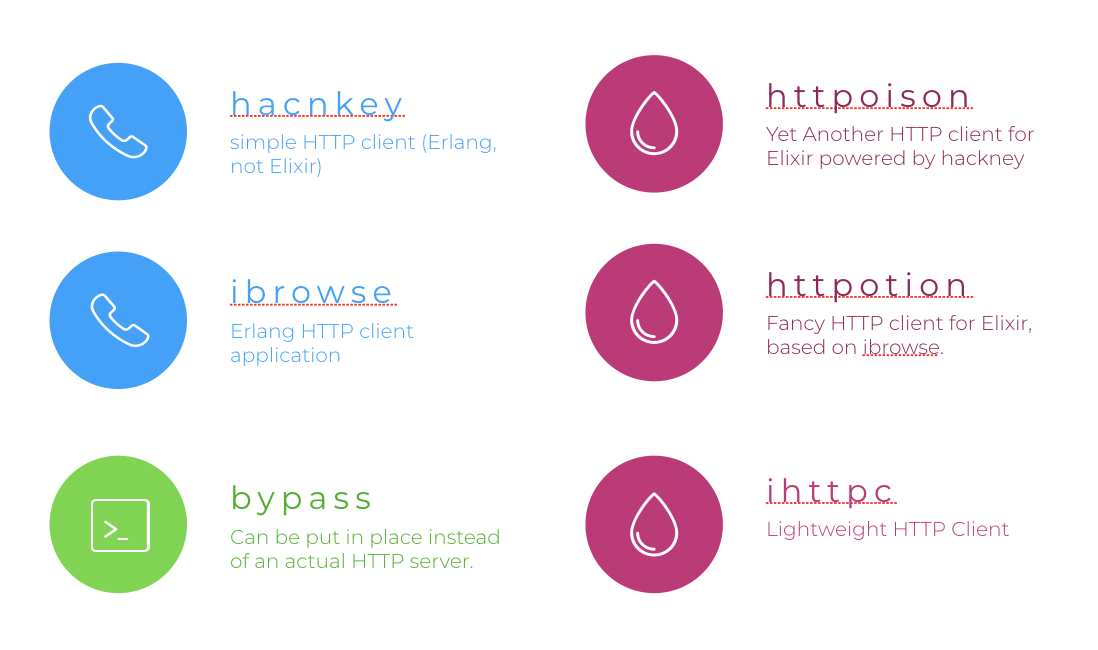 We are going to use httpoison, it is a pure Elixir library built on top of hackney and provides a very approachable interface.

Here’s how to make a GET request out to a public API.

The response is an Elixir structure that includes what you would expect like the status_code, response headers and the body (aka the return data).

Notice the ! on the method name, that is a convention to return the data, or if it fails then raise an error. The error friendly version will return a {:ok, data} or {:error, reason} response.

And if things fail, the response might look similar to

Now that we know how to make simple HTTP calls, we are ready to build our very own client.

Here is a first attempt at wrapping an HTTP get call in a client method.

In the above, we are delegating the underlying call to HTTPoision.get and then using a case statement to pattern match on the two types of responses. We can now make our call API call using our new method.

The response from our API is in it’s most raw form, in the case of the GitHub API it’s an encoded JSON string. This is not very usable within our Elixir client, so we much rather have something that we can manipulate more directly. For this, we will use poison, an Elixir library for dealing with JSON.

Here’s an example of decoding a JSON string into an Elixir map.

You will notice that Poison follow a similar pattern of :ok and :error response tuples.

Let’s incorporate that into our get method from above. But first, let’s refactor it a bit into it’s parts.

But What About Non JSON Data

Usually an API client needs only worry about one data format, but there are occasions where there might be various formats returned. How are we going to deal with that?

Well, part of a response from the API, which until now we have ignored, are the return headers. And burried deep in there the API will tell you the Content-Type.

So now we can extract the content type and use that decode the response from our API.

But before we tack that only our get method, let’s refactor it into it’s main parts.

Our call function really has not changed much from above, but we are now returning the headers in addition to the status_code and raw body.

Here’ s how we implement the content_type function.

First, we want to keep the information above, so we have a pass-through function that will keep the status_code and raw body untouched. We will pattern match on the desired tuple returned from call above.

But the acutal implementation will just focus on the headers list. We can implement this function in three parts. The first function matches an empty list, so if the API didn’t provide us with a content-type, then we will default to JSON.

The second function matches a list (in head/tail syntax) where we have located the content-type. In this case, we want to tease out any additional meta information (such a the character set) and just return the type.

The last function matches a list again, but here it’s not the content-type, so we want to check the rest of the list.

Now that we have the status code, the raw data and the content-type, we can implement our decode function.

First, our JSON implementation will remain relatively unchanged from above.

But now, we can add more decoders based on the types of data the API returns. For example, here is how we could handle an XML response.

We are using an Erlang function directly, and in this implementation we catch the :exit code that is raised if the XML is not well formed and instead wrap it in our consistent {:error, reason} response.

Finally, if we don’t understand the encoded, we will pass the raw body through, as such.

Playing With Our Own Server

Instead of poking at the GitHub API, we are now going to change focus to use a companion project myserver.

We are well on our way to implementing a full fledged client. 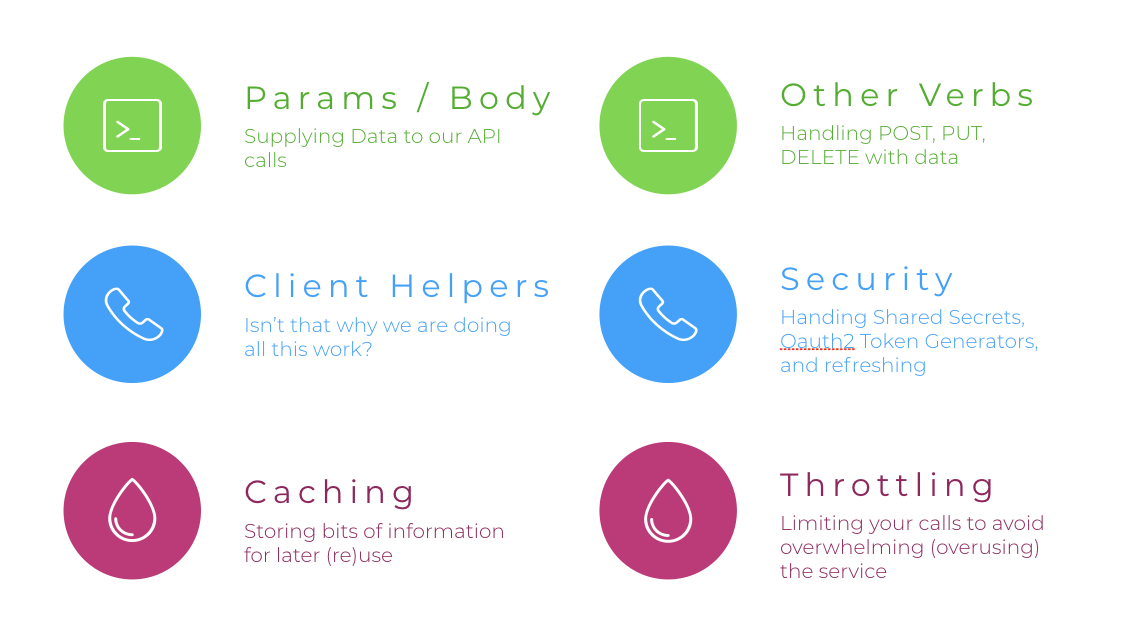 We have gone pretty far with our spike, but have not really talked about how we can test our client. Or, how to send data to the API. Or, how to handle those other API calls like POST and PUT and DELETE. Or, how to handle accessing protected API endpoints, using something like secure tokens or an OAuth2 like protocol.

Let’s address some fo these concerns in more detail, and others will be left to the reader to explore on their own.

Sending Data To The API

Sending data to the API is relatively straight forward, we just need to support additional arguments, one for the query parameters (such as ?user=sarah&filter=topTen).

To support adding data to the body, such as {"name": "James", "role": "admin"}, a similar approach would be followed.

To support multiple verbs as they are called in HTTP lingo, we need to re-work our underlying call to HTTPoison.

A bunch for of things are going on here, and we will discuss each in some detail.

First clean_url is a helper method to deal with a bug-feature in underlying httpoison API, but it also provides a few other capabilities. I leave it to the reader to review the code to see what else it is doing.

Second, we need to encode the data for transport. We can use the same content_type function to determine which encoder to use.

Third, we will by default add a Content-Type: application/json to each call, to avoid having our client automatically add it directly.

Finally, we will check to see if we have any query params, and if so, then put it into a form ready for httpoison.

Ok, so far we have really only provided a few convenience function wrappers to the raw API calls. The intent of building an Elixir Client for an API is so that we can interact with the API just like it were available directly, instead of talking about urls, and payloads and such.

So in the above, we have exposed two functions that under the hood will send GET and POST requests to our myserver service. Now those calls look and feel like normal elixir functions

And So Much More

The above provides but a glimpse of the talk. For more insight checkout the accompanying repositories.